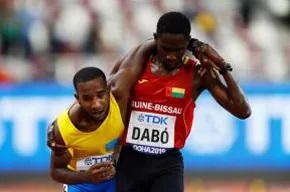 Doha: Unheralded 5,000 metre runners Braima Suncar Dabo and shattered rival Jonathan Busby drew the biggest cheer of the World Championships on Friday after a dramatic finish to their race marked by a gesture of sportsmanship.

Both Dabo and Busby had already been lapped and were competing only for pride when their final lap drama unfolded at Doha’s Khalifa Stadium.

Aruba’s Busby, 33, had slowed to almost a crawl down the back straight on the last lap, lurching forward uncertainly and appearing close to collapse.

It was then that Guinea Bissau’s Dabo came to Busby’s rescue, stopping to prop up his fellow racer and leading him around the final 200 metres to the finish line.

With the crowd roaring them on, Busby collapsed after crossing the line and was eventually taken away in a wheelchair.

“I just wanted to help the guy finish the race,” Dabo, 26, said afterwards through a translator.

“I wanted to help him cross the line. I think anyone in that situation would hve done the same thing,” added Dabo, who is a student in Portugal.

Despite the finish — nearly five minutes behind heat winner Selemon Barega of Ethiopia — Dabo’s time of 18min 10.87sec was still a personal best.

But there was a sting in the sporting tail for Busby, who was disqualified.